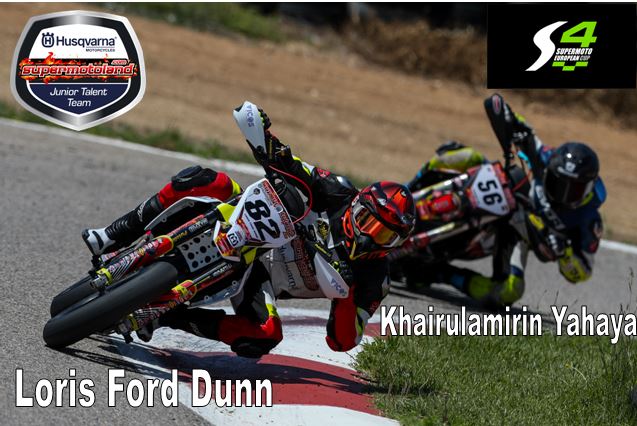 The Supermotoland Husqvarna Junior talent team will be giving two of its young International racers the chance to have a crack at the S4 European Supermoto championships at the first round in Ortona, Italy, on the 27th June.

The two riders selected to compete in the first Supermoto Grand Prix of the year are British racer Loris Ford-Dunn and Malaysian Racer Khairulamirin Yahaya. Both will compete in the S4 (asphalt only) class after strong performances in the highly competitive Spanish Supermoto championship.

The S4 class is new for 2021 and is the perfect class for racers from a road racing background as there is no dirt section with jumps, like in the S1GP and S2 classes.

The Aim of the Supermotoland Husqvarna Junior talent team is to allow young International racers to come to Europe and have a team base in Spain where they can constantly train and be coached whilst competing at the highest level. The Supermotoland race school has its own private track and makes the ideal base to train from.

Each year Young racers from all over the world are invited to apply to join the team and start their racing career in Europe. Applications for 2022 will open in September this year and riders of all abilities and backgrounds can apply to join. The concept is simple. Constant training, coaching, and racing with support from a top team on some of the fastest bikes on the track……and the results are starting to show with some impressive results from the team riders in the Spanish championships.

So let’s see what they can do at European championship level……..

If you want to know a little more about the Team and its riders then check out their short you tube video that was made at the last round of the Spanish championships in May 2021.