The new route to Motogp? 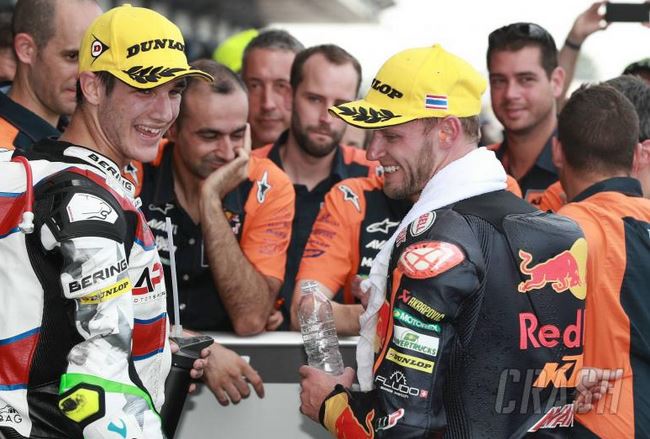 Rumors circulating the GP paddock at the moment are indicating that Iker Lecuona is being lined up for the KTM motogp ride for 2020.

The report that can be read in full at crash net , gives the full details on what appears to be happening.

If true, then this shows a new and remarkable route for racers to climb the ranks of the road race classes.

For Iker Lecuona proved his championship winning material in the Spanish Supermoto championship by winning the SM road class in 2015 whilst he was only 15 years old. Without a great deal of financial backing and on a 4 year old Honda CRF 450 supermoto bike he proved his speed and ability at a young age and without it costing him a small fortune. Most young kids start road racing and climb the ranks of moto5, moto4, moto3 and then if they are good enough and still have some money left they can make the jump into world championship racing. This is an expensive route with top rides costing 30000 to 80000 euros for a seasons racing. Time for Dad to remortgage the house ???

Supermoto racing is showing itself as a breeding ground for young talent. Kids can prove their worth, hone their skills and still have some money left in the bank as supermoto costs a fraction of the amount required for the junior road racing classes. You can also fall off a supermoto bike and not wreak the bike, and as the speeds are lower the risk of injury is also lessened. You can practice at your local kart track and tyres last for days, not sessions. All in all its cheaper and you are also learning to control a bike that is doing alot underneath you, so powerslides, backing it in and pushing and saving the front are skills that a supermoto rider deals with every time he jumps on his bike. No wonder supermoto riders smile a lot.

Iker showed his skills, then got spotted and signed by a team that took him into the Spanish moto 2 championship and the following year he was taken in to the world championships in the moto2 class where he has been ever since. Improving every season to become a consistent top ten finisher in one of the most competitive classes on the planet.

If you would like to have a shot at the Spanish supermoto championship then contact the supermotoland.com race team who have rides availiable for the 2020 season. You will be joining the top Husqvarna team in spanish championship with years of experience, top class machinary and countless race wins and championship titles to its name.

Contact Mat or Clare at race@supermotland.com tel +34 667405001 for more information and see where it can take you.