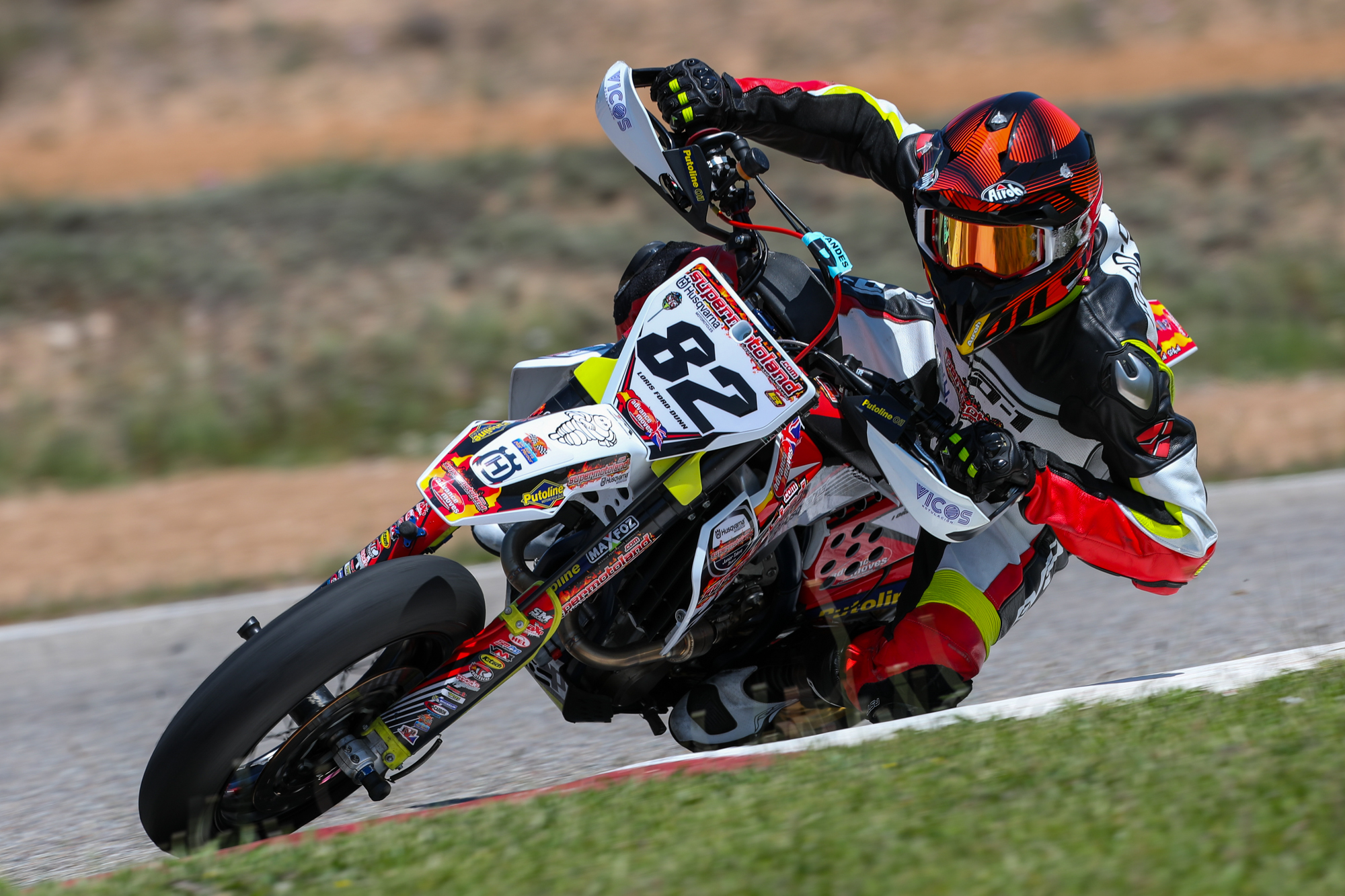 The Supermotoland Husqvarna junior talent team was in action once again over the weekend at the spectacular circuito Mora D’Ebre near to Tarragona in Spain.

With four young racers on the grid from the United Kingdom, Malaysia, the USA and Australia it was a great race weekend, with all the team riders improving on their results from the previous round, and breaking some lap records on their way to the Podium.

The Junior talent team is a joint initiative between Husqvarna Motorcycles Spain and the Supermotoland Race school to allow young International racers from overseas to compete in the highly competitive Spanish supermoto championship.

The team provides a base in Spain to constantly train and improve the young racers whilst they battle and improve their skills in the Spanish championship before progressing to European and World level supermoto or a possible career in road racing. It’s a great place to be for any racer and constant training, coaching and support from a top team mean the results just keep getting better.

British Racer Loris Ford-Dunn set his 3rd pole position of the season in the SM road class in spectacular fashion as he pitted for a new rear tire in the dying moments of the final qualifying session before setting a blistering lap time that was 0.6 seconds quicker than anyone else on the track and broke the lap record in the process.

With the young Brit starting from Pole, the pressure was on, and a bad start in race one left him with work to do around a track that was hard to pass on. He finished third in race one and backed that up with a second in race two to take 2nd overall, as well as setting a race lap record to add to the impressive results.

All he is missing now is a race win but he knows that it’s not far away and will be training hard to make it happen and to try and improve on his position of third place in the championship standings.

Malaysian racer Khairulamirin Yahaya had a mixed weekend in the SM road class with a heavy crash at the end of the 2nd qualifying session leaving him battered and bruised. Despite the crash he qualified in 17th position and had two strong races finishing in 14th and then 12th position to secure 13th position overall.

Khairulamirin, who is known as Rin by his friends in the SM paddock, is desperate to break into the top 10 and has shown that he has the pace to do so. He will be working hard to achieve that top 10 position next time out. His race results moved him up to 13th position in the championship standings and Rin will be doing all he can to turn that into a top 10 standing at the season finale at Albaida in June.

American racer Will Mcmahon is on the steepest of learning curves as 2021 is his first ever year racing. The young American continues to improve with every outing and has to learn new tracks and techniques quickly in order to progress. With such a competitive field in the SM road class it’s always a tough task to improve but for his first year of racing , he is doing a great job. Will managed to qualify in 23rd position and then finished 15th and 16th in his two races.

The race results meant he moved up to 16th position in the Spanish championship standings with one more round to go.

Australian racer Domnic Fletcher was robbed of a comfortable 2nd position in the SM junior class when a rain shower in the later stages of race 2 saw him slip of the bike just before the red flags came out. Luck was not on his side this time out but the Young Aussie has already shown his pace with a podium finish at the last race and nearly matching it again at Mora D’Ebre.

Dom, now heads back to Australia to continue his race season there but he will be back next year with the junior talent team for a full assault on the 2022 Spanish supermoto championship and maybe even a few GP’s thrown in for good measure.

The team riders are already back into training mode as they prepare for the final round of the Spanish supermoto championship at Albaida on the 13th June.