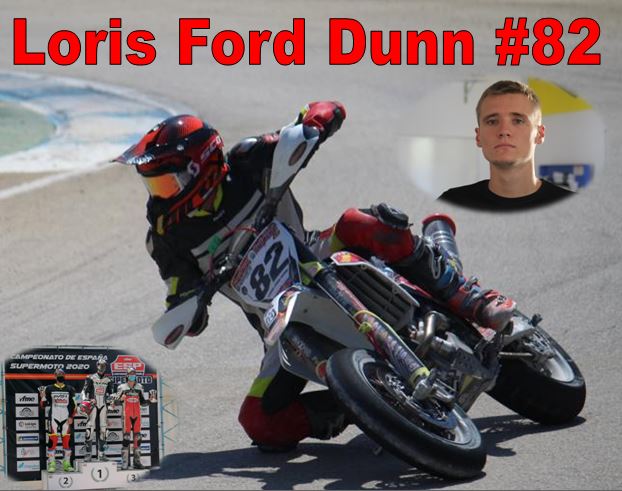 Training hard to fight for the win.

Since then Loris has been busy training and preparing to fight for the win when he returns to racing at the mora d’ebre circuit in Catalunya in October. With the team being based at the Husqvarna Supermotoland race school facility in Murcia there is plenty of time to train and perfect his race skills at the excellent supermotoland race school private training track.

With the supermotoland Husqvarna race team being the official Husqvarna team in the Spanish supermoto championship you can bet on Loris’s race bike getting a few more trick bits before racing restarts to help him battle for that championship win.

The route to Grand Prix’s

If Loris can win the SM-Junior championship this year then he will be primed to race in the Supermoto world championships in 2021 and he’s is looking for personal sponsors to help make his dream a reality and to help cover some of the costs involved in racing for championship honours.

Become a personal sponsor of Loris

Loris is looking for individuals and companies that can join him as a personal sponsors and help him to stand on the top step of that podium again and again. If you’re interested in motorsport and want to help Loris achieve his goals then we have some personal sponsorship packages to suit everyone that would like to become involved in his racing efforts.

There are three packages on offer for 2021 but if you contact us now then the deal will include the rest of 2020 as well.

Bronze Package – You will receive 2 x team t-shirts, 1 x Team Jumper, 1 x team baseball cap. Team Sticker pack and goodie bag.  Your logo/name will feature on Loris’s crash helmet. Yourself and a guest can attend all rounds of the Spanish supermoto championship with access to the exclusive Supermotoland Husqvarna team Hospitality zone with drinks and snacks/lunch included. Become part of the team and enjoy the racing from inside the paddock as close to real racing and the work that goes on behind the scenes as you can get. You will also benefit from Loris’s and the teams social media posts  and press releases. Cost = Only 1000 euros

Silver Package – Includes everything that the Bronze package has to offer plus:- Your logo/name will feature on the Team Race wear for Loris and on his race bike and leathers. You will also receive a day’s training with Loris at the Supermotoland race school in Murcia with one on one tuition, kit hire, bike hire and lunch all included before you cool off in the pool at the supermotoland.com ranch. Your logo/name will feature in a team video shot at some point during the year to showcase Loris, the supermotoland race team and our sponsors. Cost = Only 4000 euros

Gold Package – For the true motorcycle enthusiast, this is for you – Includes everything that the Bronze and Silver package has to offer plus:- Your name and Logo as a major team sponsor on all team bikes plus paddock setup and hospitality area. You will receive a set of custom made team leathers with your name on them plus helmet, boots and gloves to match the kit that Loris wears.  Your chance to train with the supermotoland Husqvarna race team at up to five occasions per year using one of the race team/race school bikes. Plus at the end of the year you get to keep one of Loris’s training bikes (in standard trim and refreshed engine) so you have your own bike to play on. Cost =  18000 euros

Join the Team as a personal sponsor of Loris

To join Loris as a personal sponsor just contact Loris by email at race@supermotoland.com or message him on his social media channels Facebook or Instagram and get involved with an exciting sport happening right here in Spain.

To find out more about Loris and the Supermotoland team check out this short video of Loris training at the Supermotoland race school track in Murcia or take a look at supermotoland website and their facebook and instagram pages with thousands of followers. The Spanish supermoto championship is televised on National Spanish TV and attracts a host of publicity in the spanish motorcycle press, regional and national newspapers and on the internet.

The supermotoland race team is very pro active in continually publicising its achievements and its sponsors to ensure that everyone knows about supermotoland and what they are doing. The British and European motorcycle press love the race school element and write features about the excellent training for all abilities of motorcycle rider.

Join us as a personal sponsor to Loris and experience national racing from inside a top team.

The supermotoland Husqvarna race team is the official Husqvarna team in Spain and has to thank  its major sponsor Advance Moves international Removals for its continued support in 2020 and 2021. Advance Moves specialises in instant online quotes for international removals to anywhere in the world. So if you’re looking to move to Spain, the UK, France, Germany, The Netherlands, Switzerland, The USA , Australia, New Zealand or any other European or worldwide destination then visit the advance moves site for an instant removal quote.

To join Loris as a personal sponsor just contact Loris by email at race@supermotoland.com or message him on his social media channels Facebook or Instagram and get involved with an exciting sport happening right here in Spain.