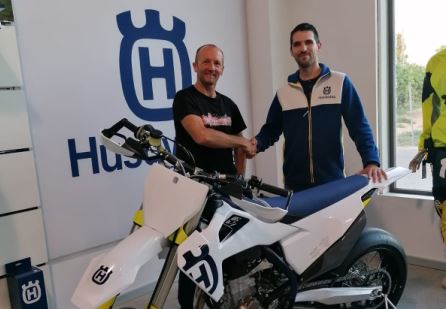 For 2020 the supermotoland race team will become the official Husqvarna supported team in the Spanish Supermoto championship.

The supermotoland race team has achieved countless race wins at regional and national level, as well as national titles and Grand prix wins since its formation in 2009. Now with the official support of Husqvarna motorcycles and the signing of former Spanish champion Israel Escalera the team looks to win races and have a shot at the 2020 Spanish supermoto championship.

Joining Israel in the team is 18 year old Loris Ford-Dunn who will be fronting the teams youth effort in the Spanish championship junior class.

Other riders joining the team will also be announced over the winter months. The team will be training at the Supermotoland race school in Bullas, Murcia and preparing both bikes and riders for their championship assault.

Equipped with the awesome 2020 Husqvarna FS450 Supermoto bike and the teams experience and knowledge in getting the best out of both bike and rider, its sure to be an exciting year ahead.