Another strong race for the Supermotoland Husqvarna Junior talent team. 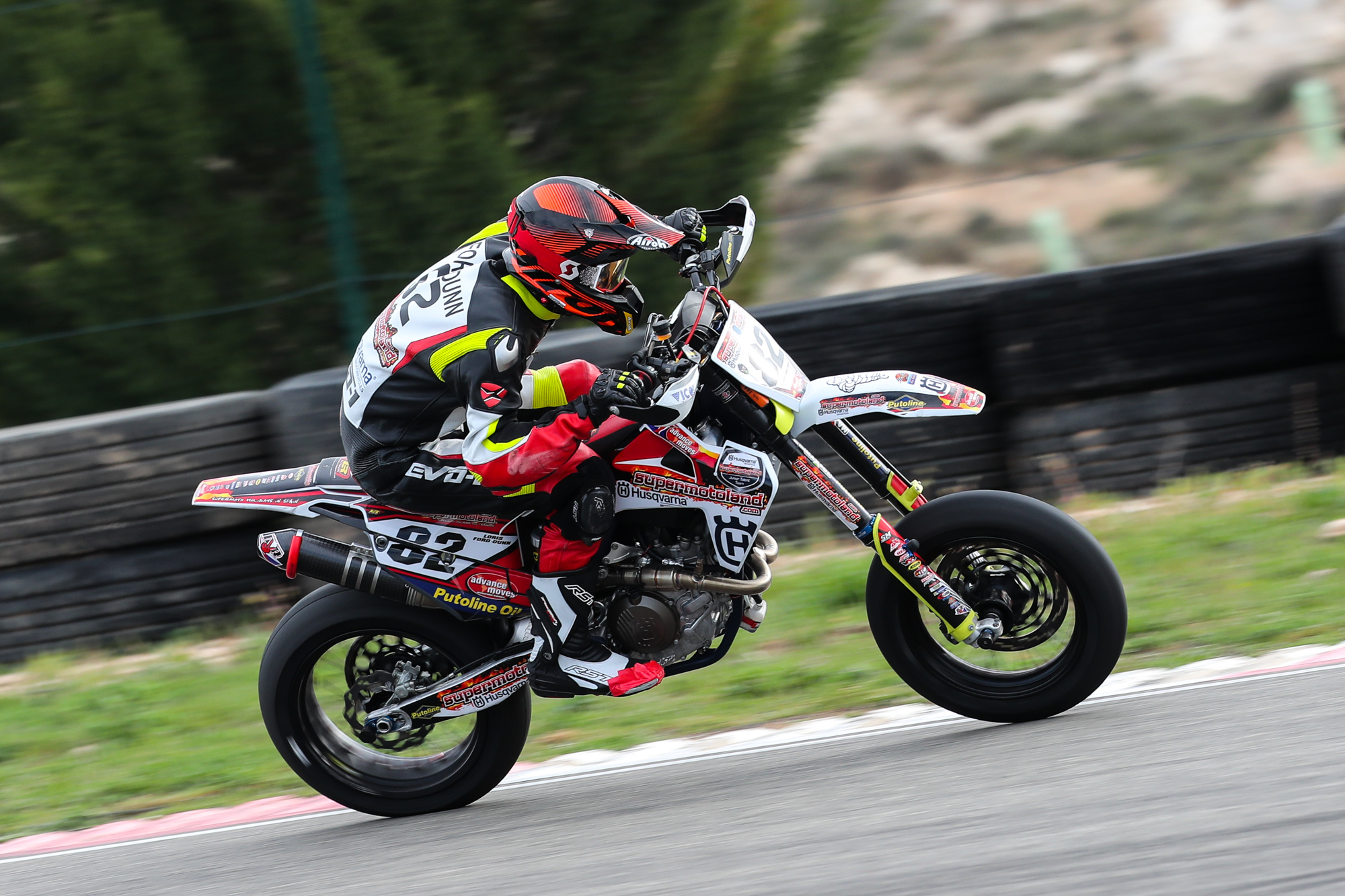 Another strong race for the Supermotoland Husqvarna Junior talent team.

The Supermotoland Husqvarna Junior talent team had its full force of four young international racers lined up on the grid for the 2nd round of the Spanish Supermoto championship at Kotar in Burgos, Spain at the weekend.

The Junior talent team is a joint initiative between Husqvarna Motorcycles Spain and the Supermotoland Race school to allow young International racers from overseas to compete in the highly competitive Spanish supermoto championship.

The team provides a base in Spain to constantly train and improve the young racers whilst they battle and improve their skills in the Spanish championship before progressing to European and World level supermoto or a possible career in road racing. It’s a great place to be for any racer and the weekends results proved once again that all the hard work is paying off.

British racer Loris Ford-Dunn just missed out on pole position in qualifying and started from 2nd place on the grid in the SMroad class. The young Brit put on an impressive display to show that he is one of three of the top racers in the championship that have a shot at the championship title. He finished a close 3rd in race one and in race two he was running in 2nd position and lining up the leader for a pass, before a small technical issue meant he had to drop his pace in the final laps due to missed gear changes and settle for 3rd position. The combined results gave him 3rd overall and a podium position whilst also securing third place in the championship.

Malaysian racer Khairulamirin Yahaya once again showed his constantly improving speed and race craft. The young Malaysian is in his second year with the team and qualified in 18th position just 1.7 seconds from pole position, which goes to show how competitive the SMroad class is. Khairulamirin, who is known as Rin by his friends in the SM paddock, then put in two strong races to finish 14th in race one and 12th in Race two with his lap times as fast as the guy in 7th position. The group in front was tantalisingly close and RIn just keeps getting quicker as he learns new tracks and the aggression and skills that are needed to make it in Spanish Supermoto. Rin now sits in 15th position in the SMroad Spanish supermoto championship.

American racer Will Mcmahon is in his first ever year of racing and Kotarr was just his third ever race. The young American is having some tough times trying to learn new tracks and the skills and speed needed to be competitive but his never give up attitude is starting to pay off with constant progression and improvement as he learns his new trade. He qualified in 19th position and then finished 18th in race one and 19th in race two with some good battles with the other racers around him as he constantly improves his speed and ability. The results gave him 19th overall for the weekend and 19th position in the championship after two rounds, let’s see what the next round brings…..

Australian racer Domnic Fletcher had his first race with the team as Covid restrictions had prevented him flying into Spain for the first round. The Young Australian was the first to admit just how tough and competitive the Spanish supermoto championship is, but when your racing against world championship GP riders like Lucas Holbacher then you learn so much, and sure enough you begin to progress. Dom was in at the deep end and had to learn a new bike, team and track in just a couple of days before qualifying and racing. Everything seemed to gel together very quickly and with the Supermotoland team giving him a great bike and set up, the lap times started to tumble. Dom qualified in 4th position in the SMjunior class and then with a couple of strong race starts and some tough battles he managed to finish 4th in race one and an incredible 3rd in Race two that gave him 3rd overall in the SMjunior class and a podium position in his first ever Spanish supermoto race. A great result for the young Australian and there is more speed to come as he trains and improves with the teams tough training schedule.

The team riders are already back into training mode as they prepare for the 3rd round of the Spanish supermoto championship at Mora d’ebre in just 2 weeks time. The supermotoland Husqvarna junior talent team would like to thank its young racers for all the hard work and relentless training that these young racers put in to try and better themselves and we would like to thank the sponsors listed below that make the teams activities possible.