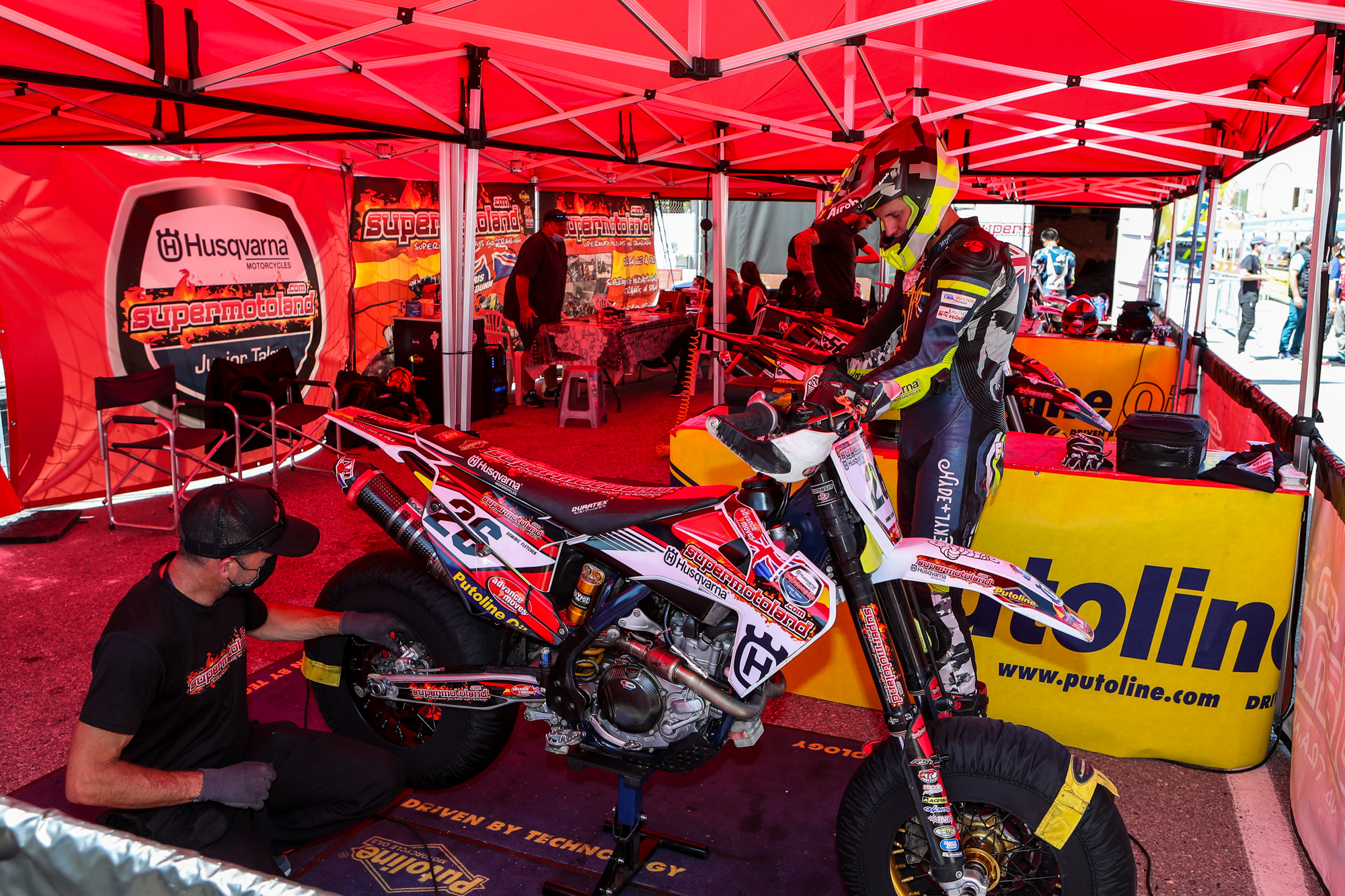 It’s been another great year for the Supermotoland Husqvarna race team, and it’s junior talent initiative that gives young international racers the chance to come to Spain to train and race in both the Spanish, European and World Supermoto championships.

The 2021 season has seen the Supermotoland race team field a team of 7 international racers in various classes and championships. With Spanish championship podiums, Lap records and regional race wins, as well as some great results at European S4 and World S1GP level.

First up was the Spanish supermoto championship with British racer Loris Ford-Dunn setting pole positions, lap records and podium finishes on his way to third overall in the Spanish SM road championship. The only thing he was missing was a race win, although he managed that in a regional race against some top class competition at the Kotar race track in Castilla y Leon.

Racing alongside him in the Spanish SM road class was Malaysian racer Khairulamirin Yahaya, who is known as Rin to his friends. In his second season with the team Rin was getting faster and faster and was looking for a top ten finish in the championship. He had a serious pelvic injury from a crash before the final round of the championship and missed the final races, but he still finished 15th in the highly competitive Spanish SM road championship. He was a consistent top 15 finisher in the series and also scored a 2nd place at a regional race earlier in the year.

American racer Will Mcmahon was in his first ever race of any kind at the first round of the Spanish supermoto championship. Before that he was just a track day rider in the United States that wanted to have a go at racing. With constant training and coaching at the Supermotoland training track he soon got himself up to a respectable speed with a regional race win to his name and finishing 18th overall in the Spanish SM road championship. An impressive first year of racing.

In the SM Junior class it was Australian racer Dominic Fletcher who impressed with a top 3 podium finish in his first race with the team, that was backed up by 3rd overall in the SM Junior championship and 15th overall in the blue ribboned SM-Pro title, against the likes of S1GP racer Lucas Holbacher. The incredible things was that Dom only did two rounds of the Spanish championship. Think what he could of done if he had raced at all 4 rounds……..

One of the team goals in 2021 was to take some of its young racers to the European championships to give them a run at an even tougher level of competition. As well as regular team racers Loris Ford-Dunn and Khairulamirin Yahaya the Supermotoland Husqvarna team would invite Wild card riders to join the team for one off rides at this higher level.

British racer Loris Ford-Dunn had a great crack at the S4 European cup with  two 6th positions in the first two rounds before injury forced him to miss the final round. He still managed a credible 5th overall in the championship standings.

Malaysian racer Khairulamirin Yahaya had to miss most of the races due to injury but returned at the final round whilst still recovering his full fitness. He used the ride as part of his recovery process and managed a 7th position in the weekends races and finished 14th overall in the European championship standings. He was also the first ever Malaysian racer to compete in the European Supermoto S4 championship.

British wild card racing couple Jodie fieldhouse and James Welch both had their first taste of S4 Supermoto racing at the Spanish GP. Both are from road racing backgrounds but they put on an impressive display  in their first ever supermoto race. Jodie finished 10th and James just behind her in 11th. This meant they also finished 17th and 18th in the overall championship standings. Jodie was the first women to compete in the S4 European supermoto championship, a feat that will hopefully encourage more women to race Supermoto.

Malaysian racer and multiple Malaysian champion Muhamed Habibullah, (who is known as Gabit to his friends and race fans) became the First Malaysian racer to enter the World S1GP championships. Competing at the final GP of the year Gabit put on an impressive display to finish 15th overall in his first GP despite having a DNF in his third and final race with a front tire puncture. He finished 23rd overall in the world championship standings and really enjoyed the experience of racing in Europe. Maybe we will see a full world championship assault by him next year???

The Supermotoland Husqvarna Race team would like to say a big Thank you to all its racers and their hard work, dedication and training that makes them into better athletes every time they throw  their leg over a bike. It truly is remarkable what they put into their sport with Supermoto land helping them to achieve their goals.